The Next Adventure Begins

In 1976 I crewed in the Transpacific Yacht Club's race from LA to Tahiti aboard Irv Loube's newly constructed 49' sloop Bravura.  Also aboard Bravura for that race were Rob Vaughan, who oversaw the boat's construction and was the professional skipper, and Watch Captain Simon Willis from New Zealand.

Fast forward 41 years.  Rob will be sailing his 66' custom cruising sloop, Van Diemen III, from his current homeport of Newport Beach, California, to his childhood hometown of Hobart, Tasmania.  Simon and I will be sailing with him.  We are scheduled to depart Newport Beach in early April with stops along the way in the Marquesas, Tuamotus, Societies, Cook Islands, Tonga, Fiji, and New Caledonia before reaching Australia and heading south along the coast to Tasmania.  We should arrive at our final destination, Hobart, just before Christmas.

Lori has already cruised extensively with me in Tahiti, Tonga, and Fiji so she has decided not to join Van Diemen until we reach the coast of Australia.  I will likely fly home once or twice along the way for a week or two from convenient ports (Papeete and/or Fiji) to take care of business at home, hug my beautiful and tolerant wife, and soak in the hot tub.

I'm hoping to blog about the trip on this site like I have for my past few voyages.  I'm not yet sure how this will work out as the communications hardware aboard Van Diemen differs from that aboard Moku pe'a.  If I can't blog regularly then I will post updates when I can. 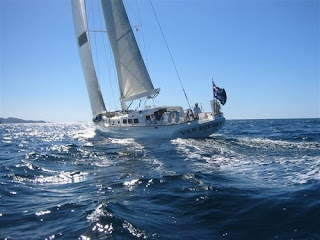 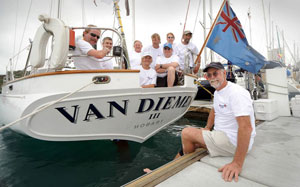 Posted by Noodle's Notes at 2:22 PM No comments: