Lori Lloyd and I are cruising in Mexico for a week with pals Tim Dick and Kim Le aboard Tim's new Lagoon 42 catamaran "Malolo".  This is a short trip that came up at the last minute, and I wasn't planning to blog, but we've already had too much to laugh about in two days to not share it.
Two weeks ago I got an email from Tim, "Do you want to do a week long goof cruise in Puerto Vallarta with us the week before Christmas?"  Goof cruise meant doing some sailing, but not really going anywhere outside of Banderas Bay, a twenty mile deep inlet on Mexico's west coast.  Going meant missing my daughter Kendra's thirtieth birthday "beer mile" party, but these opportunities to sail with friends in exotic locations don't come up every day, so we signed on and here we are.
We decided to spend our first full day provisioning, getting the boat ready, and then touring historic Puerto Vallarta.  We got the work done in the morning and then caught a water taxi about fifteen miles from our marina in Nuevo Vallarta to town.
Puerto Vallarta is clearly a tourist town with an equal split between Mexican and foreign tourists.  There is a waterfront promenade that reminded me of a cross between Key West, Olongapo in the Philippines, and Bourbon Street in New Orleans.  Street vendors sold hats, food, and tchotchkes.  Musicians, artists, and acrobats performed.  Hawkers tried to drag us into their establishments fronting the overcrowded waterfront mall.  Mixed in were guys in military fatigues toting loaded M-16s.  It was all very surreal and entertaining.  We walked the back streets, visited the cathedral, and were the sole visitors at the country's martime museum.  We ran out of gas just after sunset, and had dinner at a nice Italian restaurant there on the boardwalk. 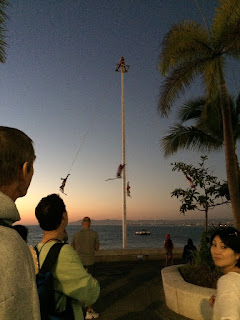 After dinner we caught a cab back to our marina.  It was about a forty minute ride and our cabbie dropped us off at the entrance to the shopping center a quarter mile from the boat.  We got home feeling like we'd had a great day and got ready to go to bed early so we could get an early start on cruising this morning.
"Oh shit! My cell phone is gone," Tim exclaimed shortly after we returned to Malolo.  "I must have left it in the cab!"  A rapid heated discussion ensued on possible retrieval options.  Our technically savy crew members (Tim and Kim) determined that the iPhone "Find My Phone" feature could help us locate Tim's wayward device.  They did some magic on Kim's iPhone and up came a map showing the location of Tim's phone at what we thought was the spot where we were dropped off by the cab.
"Maybe the cabbie found the phone and came back!" Tim rushed off towards the shopping center using Kim's phone as a guide.  I followed him up a few minutes later and found him wandering around looking at Kim's phone screen.  The cabbie hadn't come back, and besides, the map showed Tim's phone in a different  location nearby.  We marched around following the map on Kim's phone, narrowed in on the spot shown on the map, and eventually found ourselves back aboard Malolo.  "The phone must be here aboard the boat!  Maybe I didn't lose it after all!"
Lots of digging through bags, pants pockets, and some thinking led the crew to the conclusion that not only was the phone not on Malolo, we weren't even tracking the phone.  The "Find my Phone" app apparently tracks all of your Apple devices, and we were, in fact, tracking Tim's MacBook, which was running happily on the salon table.
Our tech gurus punched some buttons and the map showed that Tim's phone was back in downtown Puerto Vallarta.  He and I jumped in a cab and sped off towards town.
We had a little bad luck in our choice of cabbies.  His transmission was on the bitter edge of complete failure, and every mile or so the gears would grind, he'd mutter some profanity in Spanish, and the cab would nearly come to a halt in the middle of the busy roadway before he'd get it to work again, temporarily.  We were out of the door on one of his many stops before his pleading convinced us to get back in.
The map showed that the phone was stationary in town during our entire forty minute taxi ride.  We closed in on the phone's location and pulled over.  Tim dashed off with his iPhone map in hand and searched for our first cab while I held the second cab, just in case.  After a few minutes I paid our guy off and let him go as Tim hadn't returned.
I found Tim wandering around looking in storefronts for shady characters.  "My phone just disappeared from the screen!  It must have been shut off!"  We suspected it was now a stolen phone, and whoever had it had seen Tim searching and shut it off.  After a few minutes he tried expanding the map to pick up a larger area and there it was again, the phone had moved about six blocks back close to where we had originally been picked up by our first cabbie!
Off we went on a run, dodging through tourists and locals, two tall skinny Americans in flip flops.  We felt like the Keystone Cops, two bumbling gringos following a dot on a map on an iPhone.  We ran up the waterfront mall past the street artists, hawkers, tourists, and acrobats.  We're not sure what would have happened if we'd run into the armed military guys.  We found our cabbie mingling with his pals, waiting for his next fare, and there on the floor of his car, was Tim's iphone.
One more forty minute cab ride and we were back aboard Malolo, crisis resolved, and ready for bed.  Isn't technology wonderful? 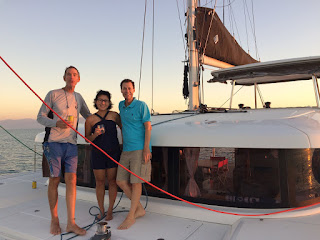 Today was fun, but less exciting.  We got an early start, sailed out to Las Tres Marietta's Islands at the entrance to Banderas Bay, and then headed offshore to do some fishing.  We didn't catch anything, but the humpback whales put on a great show for us and we had a pleasant sail.  We are now anchored for the night under Punta Mita, a headland at the north entrance of the bay.  This is a flat and uncrowded anchorage and we are looking forward to an uneventful evening. 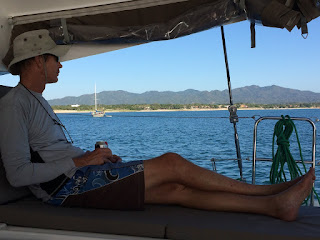