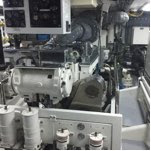 The seas continue to moderate as we get further north. The motion is now quite pleasant and less and less spray is hitting the pilot house windows as we punch through the chop. It is getting cooler too. Outside air temperature is down to 65 degrees.

After I got off watch this morning Don and I dug into the still not functioning computer system that monitors most of the systems aboard Starr including tank levels and alarms. It is a pretty important system for safety so we needed to get it working again. A dedicated computer runs a program that monitors the systems. For some reason the computer and the systems weren't talking to each other. We rebooted all the components and checked all the connections, but nothing seemed to help. After 3 hours of messing with it we gave up and called the guy who installed the system in Seattle. It didn't take him long to determine that our Ethernet router wasn't doing its job in assigning IP addresses to the system components. It turns our out Ethernet router is also our little wireless router that sits on the shelf in the wheelhouse. We had unplugged the router a couple of days ago because we don't have WiFi at sea. We plugged it back in as directed and everything is working fine now. Go figure. Nothing beats a self inflicted injury. The up side is that now we know that particular system pretty well.

Starr is complex but has a lot of redundancies for safety. We have two radars, at least two navigation systems, two depth sounders, 27 (Clay has been counting) gps capable instruments, two generators, more than two bilge pumps, etc. Probably our most important system, and the one without full redundancy, is our main propulsion system. Starr is a single screwed trawler and she is powered by a single 400 hp Cummins diesel. We get pretty good mileage for a 100 ton vessel, about 1 mile per gallon of diesel fuel. To provide a redundant source of power should our main engine fail, the boat has a "get home" system which hydraulically connects the two generators to the main prop shaft. We tested the system off of Waikiki before we departed on the trip, and Starr can move at about four knots using the "get home" system. Of course, we would be out of luck if the propeller shaft or propeller were unusable.

Our albatross is still with us, and we are seeing a bit more junk in the water. Clay saw some white plastic floating and I saw a black plastic fishing float on my morning watch. The glass ball watch is starting.

Posted by Noodle's Notes at 6:14 PM No comments:

We are slowly settling in to life aboard Starr. It's the beginning of our third day at sea now and the crew are getting their sea legs. The wind and seas are beginning to moderate a bit as we approach the North Pacific high pressure area. In a day or so it should be flat calm. Barometric pressure has risen from 1013 to 1021mb.

Four of us, Sharry, Clay, Kyle and I, are standing 3 hour watches on our own. Don is floating, spending time with each of us as we learn Starr's systems and operating procedures. He also spends a lot of time fixing stuff. Yesterday it was the stabilizers. Today one of our computer integrated instrument systems decided to go on strike.

I have the 6AM to 9AM watch and the 6PM to 9PM watch. I get to sleep all night. Civilized indeed. The watch stander mans the wheel house, monitors Starr's systems, and keeps watch for marine traffic and floating debris. Autopilot steers the vessel. There are panels full of instruments and numerous alarms for the systems aboard. There are two radars and a navigation computer with AIS to warn us of approaching traffic. We even have a forward looking sonar to warn us of underwater obstacles that we will turn on when conditions warrant. Sharry picked up a fishing boat about twenty miles away during her watch last night. Other than that one vessel and a brown albatross that is keeping us company, we've seen nothing since leaving Oahu behind.

It's been too rough to leave doors open for ventilation so we've had the air conditioning system running for the past couple of days. It is a new experience for me, sitting comfortably in the air conditioned wheel house in t-shirt and shorts as spray lashes the windows around me. If I were standing watch on a sailboat in these conditions I would probably be wet and miserable.

It is a lot different off watch as well. After my watch ends at 9PM I head down to my stateroom for a hot shower and stretch out in my Queen sized bed for nine hours of uninterrupted sleep. Yes, I could get used to this.

Posted by Noodle's Notes at 3:35 PM No comments: 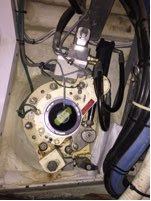 It was relatively pleasant even after we got out of the lee of Oahu yesterday, but as the afternoon wore on the winds and seas increased until it was pretty uncomfortable aboard Starr. The winds are up near 20 knots now, as forecast, but it is the seas that are bothersome. We are headed north, and there is a moderate swell form the north east, no doubt the remnant of wind from that direction a couple of days ago. There is also a swell from the east that matches the current wind direction. These swells combine to make a confused sea that has Starr pitching and heaving.

Our stabilizers (picture of control system inside boat is attached) control the rolling. There are two large blades sticking out of Starr's hull amidships that turn to prevent the boat from rolling in the large seas. These blades use the vessel's movement through the water to create force to stop the rolling. As the boat starts to roll to port, the port side stabilizer turns to try to lift the port side of the boat. The starboard stabilizer turns to pull the starboard side of the boat down. The opposite happens when she tries to roll to starboard. These stabilizers are computer controlled and use hydraulic power from the main engine to operate. It is a complex system, but when it works Starr hardly rolls at all, even in these large beam on seas.

Unfortunately, the stabilizer system started acting up last night. It was chattering as the hydraulic rams operated to turn the blades. We were concerned that it would.get worse and damage the system so we shut down the port stabilizer, which was chattering the most, and ran using just the starboard stabilizer. Not as comfortable, but better than nothing. This morning Don got on the sat phone with his stabilizer guru in Seattle to trouble shoot the problem. We are confident that there is nothing wrong with the hydraulics, and think it is a computer issue. Don made some adjustments to system sensitivity which seem to help. The port stabilizer is back on line and the rolling is controlled for now.

All of us aboard are uncomfortable in this seaway. None of us have been to sea for a few months, and after being on dry land for awhile it almost always takes a couple of days to get our sea legs. There's not a lot of eating going on, but I'm sure that will change as we get more comfortable with this motion.

The most comfortable position is horizontal, so most of us are lying down when we aren't on watch or having to do something else.

We are about 200 miles north of Oahu now. You can see where we are anytime using this link http://forecast.predictwind.com/tracking/display/Starr. The same link is on the right side of the blog web page.

Posted by Noodle's Notes at 3:11 PM No comments:

MV Starr is underway on her adventure to Alaska! We cast off from the Waikiki Yacht Club this morning at 810AM, and as I write this we are moseying north along the Waianae coast about a mile offshore. Starr's cruising speed is a bit less than eight knots. We can go faster, up to about thirteen knots, but at the higher speeds we burn a lot of fuel and would run out half way across the ocean. At eight knots our fuel consumption is reasonable and won't have any problem making it to Alaska with the fuel we have aboard.

One of the advantages of being aboard a cruising boat is the ability to go anywhere you want to. Our originally planned destination was Kodiak Island, but we've been hearing some good things about the island of Unalaska, a spot in the Aleutians some 900 miles to the southwest of Kodiak. Our landfall in Alaska will likely be weather dependent. We may end up east or west of our desired destination if we have to avoid a weather system. If this was international travel we would have to ensure we entered the foreign country at an official port of entry, but we are traveling within the US, so we can go where we'd like to.

Right now the weather looks pretty good for the trip, but forecasts become unreliable more than a week out. It will likely take us about 11 days to get to Alaska, so the weather for the second week is still a bit uncertain.

There are five of us aboard Starr for this passage. Don and Sharry Stabbert, Starr's owners, have been cruising her extensively for nineteen years. They are running the show, with Kyle Kim, Clay Hutchinson, and myself (Noodle) aboard as crew.

Posted by Noodle's Notes at 3:47 PM No comments:

Over the past forty two years nearly all of my cruising adventures have focused on the South Pacific.  I'm still in love with the place, and I'll never get tired of it, but after six voyages south it seems like the time is ripe to do some exploring somewhere else in the world.

As luck would have it, we got a couple of invitations to do some cruising on the Pacific coasts of Alaska and British Columbia this summer.  Don and Sharry Stabbert have invited us to make the passage from Honolulu to Kodiak, Alaska with them aboard their seventy five foot motor vessel, Starr.  Lori declined because she gets seasick, but I jumped at the opportunity.  Starr is quite seaworthy and comfortable, and the trip should be fun.  We'll depart the Ala Wai when the weather looks good during the second half of May.  Lori may fly up to do some cruising with us once we arrive in Kodiak.

In mid July we'll be joining Matt and Vicki Dyer aboard their motor vessel, Thankful, in Sitka, Alaska.  Matt and Vicki cruised with us aboard Moku pe'a in Tahiti in 2011 and Tonga in 2014.  Matt also doublehanded with me aboard Moku pea on passages from Tahiti to Hawaii and Tonga to Tahiti.  It was always a laugh a minute cruising with the Dyers and we're looking forward to more of the same.  We'll spend a month exploring Alaska's fjord land.  Lori will fly out and I'll stay aboard for another month as we work our way south to Thankful's home port in Gig Harbor, Washington.

Posted by Noodle's Notes at 6:21 PM No comments: