I've been busy these past few years cruising in the Pacific and Atlantic Oceans on other peoples boats, but poor Moku pe'a hasn't stretched her legs on a long cruise since bringing us safely home from the South Pacific in late 2014.  That's about to change as she gets ready to cast off on an "Around the State" voyage on 1 June.

Tasmanian Michael Vaughan, a shipmate from Van Diemen's 2017 Transpacific voyage, will be aboard with me for the whole trip.  Dave Schaefer, who spent a week cruising on Moku pe'a in the Society Islands in 2014 will sail from our home port of Kaneohe to Hanalei Bay on Kauai.  My daughter Kara, who doublehanded Moku pe'a with me from Hawaii to Tahiti in 2011 will make the first day's hop to Waimea Bay on Oahu's north shore.

Moku pe'a can't complain of being neglected.  She takes Lori and I on sails down the bay, usually with guests aboard, at least weekly when I am in town.  She is pampered and maintained as well.  In late March we had her drydocked in Honolulu for her biennial cleaning and bottom painting.  Her bottom is as smooth as silk and she is ready to go. 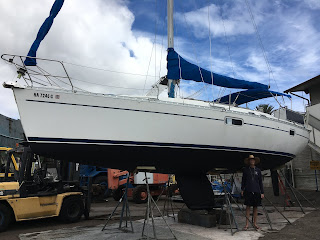 I can feel Moku pe'a getting excited and tug at her dock lines as I proceed through the "Go To Sea" checklist.  The wind generator and cockpit weather cloths have been installed.  Tanks are full and the non-perishable provisions are filling up the lockers.  We are testing a new dinghy this weekend.  There's not much left to do except a trip to Costco next Friday for the fresh provisions.

This will be Moku pe'a's third trip "Around the State" following the route outlined in "Noodle's Notes on 50 Years of Sailing in the Hawaiian Islands", the cruising guide I published on-line a few years ago.  If you're interested in seeing our planned route, you can find it on page 63 of the cruising guide at noodlesnotes.com.

I hope to post daily blogs once we get underway, but my ability to do so will be dependent upon a satisfactory cell phone data connection.  I know we won't be able to connect from Niihau, during the three day sail from there to the Big Island, and on Molokai's north shore, but we should have coverage the rest of the time.

Posted by Noodle's Notes at 8:19 PM No comments: