I'm sitting at the table in Van Diemen's great cabin looking out the saloon windows at a glorious morning. I've had my coffee and granola and now it's time to get down to business.

We are beam reaching under full sail and flat seas in eleven knots of breeze averaging about eight knots. We powered out of Newport Harbor in light conditions and motor sailed all night until the breeze finally filled in from the northwest at 7AM and we shut off the engine. Van Diemen is aimed straight towards the Marquesas. There isn't a cloud in the sky and there is nothing but horizon in sight. The last loom of the lights from LA and San Diego disappeared behind us while it was still dark last night.

After a month of "maybe tomorrow"s Van Diemen finally got underway at 7PM last evening. I had been in Newport for more than a month working twelve hours a day, seven days a week, to get the boat ready to go. When I arrived I had expected to be spending a few days helping provision the boat before we departed, but Van Diemen's once every fifteen year refit was behind schedule and the boat had to be put back together before we could depart. It is satisfying to see what we accomplished, but I really didn't need that much satisfaction. However, it is all behind us now, and we are streaking toward paradise. Now comes eight months of fun as we island hop across the South Pacific to Tasmania.

It should take us two weeks or so to get to the Marquesas. I am really looking forward to this island group. I last cruised there in 1986 aboard Eleu, my Ranger 33. We had a great time in these rugged and sparsely populated islands, but we didn't stay long and there was lots we didn't see. We are planning to spend a couple of weeks there this time and I'm hoping to fill in the blanks.

The forecast doesn't show much more than ten knots of wind for the next week or so as we approach the equator. Hopefully we will have enough to keep sailing and avoid using the engine.

We've got an interesting watch system going on Van Diemen. Everybody takes turns spending two hours on "standby" and then two hours on "watch", so you are on duty for four hours. The guy on standby is there to assist the guy on watch, who is supposed to be on deck managing the vessel. With five of us aboard, that means four hours on and six hours off. I come on standby when Rob is on watch, and Longy comes on standby when I am on watch. They both have tons of sailing experience and are great story tellers so I am being royally entertained.
We each have our own bunks aboard the boat. I am in the crew cabin, forward of the mast on the starboard side of the boat. It is a good spot well away from the noise of the engine and quite roomy.
Posted by Noodle's Notes at 11:29 AM 1 comment:

Almost to the Starting Line

The end of the beginning is in sight.  All of my stitches are out and the scars are healing nicely.  A few days ago we went for our first sail, and it was uneventful (a good thing).  We need to make a few modifications to the main sail reefing setup and jib leads but we expected this.  The boat is just about completely reassembled with just some odds and ends remaining.  We are now looking at possibly a Tuesday, 25 April, departure if there are no more surprises.  There is still a lot to do with provisioning and safety gear and medical supplies and …  We are sprinting to get there.

We’ve had some crew changes for the first leg.  The hurdles to bringing Put-put, Renee and Rob’s dog, to Australia by boat were too high to clear so Renee and Put-put will fly to Australia.  Put-put will go through quarantine and go into residence there with family.  Renee will join the boat in Papeete.  Simon Willis flew in from New Zealand to join us and worked for two weeks on the boat, but he was still having health issues from his stroke a couple of years ago.  He wisely decided to pass on the cruise and he flew home a few days ago.  I'm sorry he's gone.  We sailed a lot of miles together.  His humor, sea stories, and sailing skills will be missed.  Longy Schuster, who is managing Van Diemen’s refit, will join us for the first leg to Tahiti.  That makes five of us for the passage which should be about right.

Posted by Noodle's Notes at 7:24 AM No comments:

This is the hardest I’ve worked in twenty years.  We wake up at first light at Rob and Renee’s, have breakfast, and head down to the boat.  We work all day putting Van Diemen back together with a break for lunch.  We usually quit for the day just after dark, which is about 8 PM here.  We’ll pick up some take out for dinner, eat at home, have a beer, a shower, and go to bed just after 10 PM.  The only breaks since Lori left on April 4th have been for surgeries on my hand and face.

Sorry there haven’t been any blog posts, but I haven’t had time to write them.  The boat is coming along.  All of the deck stanchions and fittings are installed now except for two halyard winches on the cabin top.  The permanent bimini and barbeque, both critical for quality cruising, are set up.  We’ve fitted the new jib and recut mainsail, and today I installed new padeyes for the three reefs on the boom.  We were hoping to go for a sail tomorrow to test things out, but we had a backstay hydraulic failure yesterday that hasn’t been repaired yet so we’ll see.  We can’t go out without a backstay.

We probably have another week of odds and ends and provisioning before departure.  We shall see.  On Monday I get the stitches out of my face and hand so I’m glad we are still in port for that.  I wasn’t looking forward to having one of the boys take my stitches out at sea. 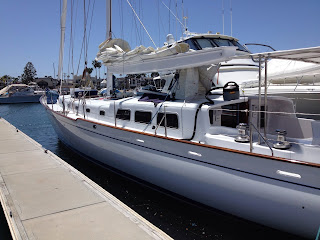 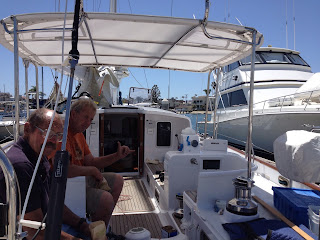 Posted by Noodle's Notes at 9:51 PM No comments:

We’ve been delayed here in Newport well past our original scheduled departure date of 8 April, but that has turned out to be a good thing for me.  The day before Lori and I flew to California I noticed what I thought was a wart on the back of my left hand.  No big deal, I have skin imperfections like that all over my body.  But after a few days on the mainland I noticed that the wart was starting to get bothersome when I bumped it and seemed to be growing in size.  After a week here I was concerned that it might be more than a wart, and Rob and Renee were talking about seeing their dermatologist, so I got contact information from them and called to make an appointment.  Good thing I did.  On Monday the dermatologist did biopsies of the spot on my hand and another on my chin that was also concerning me.  On Tuesday I learned that both were cancerous with the one on my hand being an aggressive type that doubles in size every 2 weeks.  Yikes!  I don’t want to imagine what I would have done if this thing had started growing when I was 1000 miles from the nearest land.  I had surgery to remove the growth on my hand on Wednesday, and will have the growth on my face removed next Tuesday.  I have six stitches in the back of my hand which will limit its use for a week or so but afterwards I should be fine.

My lifelong failure to adequately protect myself from the sun’s harmful rays by using sunscreen, protective clothing, and hats has come back to haunt me.  Learn from my mistakes.  Wear sunscreen, hats, and long sleeves.

Work progresses on Van Diemen.  Deck painting was completed on Thursday so deck fitting and stanchion reinstallation are underway.  On Wednesday  I swaged on some hydraulic fittings, played with the new instruments to figure out how to use them, and helped Simon drill a hole through the deck to install a new electric winch.  I’ve installed a hawse pipe, water maker, pad eyes, boom vang, and all of the boom fittings.  We can see the light at the end of the tunnel, but we’ve got a long way to go. 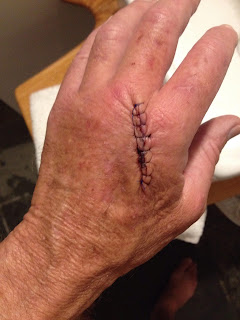 Lori and I arrived in Newport on 27 March to find Van Diemen at the Basin Marina in what looked like the middle of a complete refit.  There weren’t any lifeline stanchions or other fittings on deck.  The deck has been primed but not painted.  The mast had been installed the day before we arrived but the rig isn’t tuned yet.  There were no fittings on the boom.  The boat’s interior was in pieces.  It didn’t look like a boat that was getting ready to go to sea…  The boat was behind schedule due to all the rain this year that southern California rarely gets, but Rob has it organized and he hired Longy Schuster, an old friend of mine and boat commissioning expert extraordinaire, to manage the refit and get the  boat ready to go ASAP.  It is looking like we will be a week late or so on our departure, but I am confident that we will get it together.  Our new departure target is 12 April.

Lori and I had expected to be staying aboard the boat, but it is full of tools and parts, there aren’t any bunk cushions or doors on cabins or cabinets yet, and there are workers coming and going all day.  Rob and Renee have set us up in the guest bedroom in their home nearby in Corona Del Mar, and we are very comfortable there.  I have been spending my days attaching boom hardware, organizing charts, setting grommets in lee cloths, and building cabinets for Rob’s house because that is under construction too.

I’ve seen Rob only briefly twice since we last sailed together forty years ago, so we’ve been doing some catching up over our evening meals.  We’ve been getting to know Renee, who will likely join the boat in Tahiti, and Lori is gaining confidence that I will be safe and happy on this adventure.

We’ve carved out some time to spend two fun evenings with Ken and Melissa Corum and Andy and Ellen Fitzpatrick, pals of  Lori’s and mine from high school days that live in the area.  It is always great catching up with old friends.

This next week should be interesting as the boat is put back together, crew for the trip arrive from overseas, and we begin loading provisions and supplies for a nine month voyage.  Lori flies home tomorrow, so she will miss the fun. 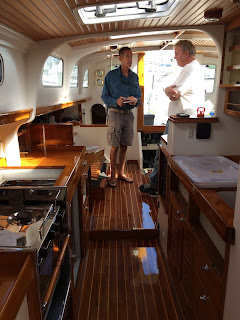 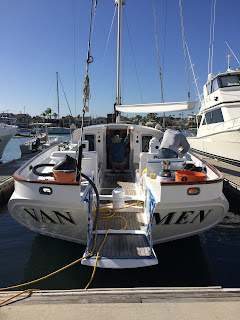 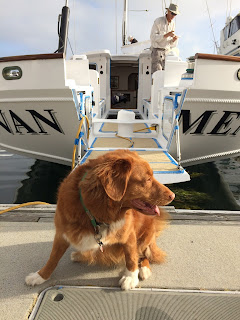 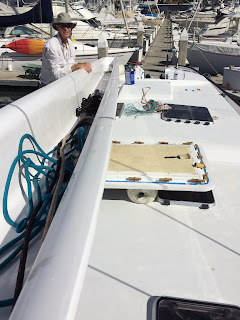 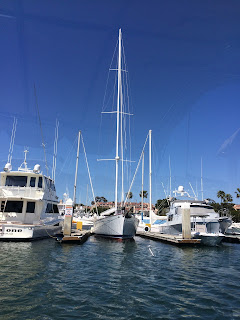 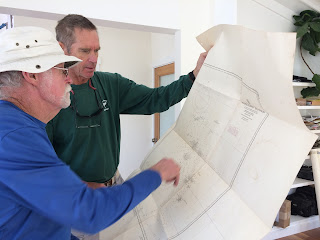