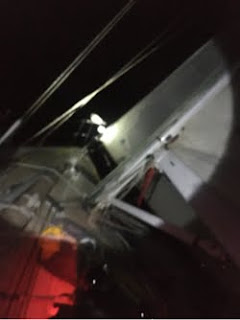 We got lifted as expected and by 4pm were headed directly towards our destination at Okoe Bay. Kauai and Niihau disappeared behind us and Puanani sailed over the horizon to the west. We were all alone on the open sea.

Our heading takes us far enough west of the Hawaiian Island chain that we won't see any other islands until the Big Island comes into view tomorrow.

We are using the Swedish watch system of 6-6-4-4-4 hour watches each day. With an odd number of watches every 24 hour period, we end up on a different schedule each day. Bo took yesterday's afternoon watch, I was on from 6-10PM, he was on from 10-2AM, and so it goes.

During my early evening watch a flock of boobies decided that Maka'oi'oi would be a good place to spend the night. One tried landing on the top of the mast, bent the Windex wind direction indicator so it doesn't work anymore, and departed. One successfully landed on the bow pulpit and spent the night. The third decided that the wind generator would be a good place to land.

That turned out to be a bad decision. I heard him make contact with the spinning carbon fiber blades and splash into the sea behind the boat. I don't think the poor guy made it. The wind generator survived, but it is vibrating a bit now.

It was beautiful night sailing in 15 knots, smooth seas, and a full moon.

At the 10PM watch change it started pouring as we entered the lee of Oahu. We powered for two hours until we got into the Molokai Channel and the skies cleared for the rest of the night. The engine just went on again as we are dealing with the lee of Maui. We should be well into the Alenuihaha Channel during my afternoon watch.

We expect to make landfall in Kona tomorrow morning.

No word from Puanani. We've tried the VHF radio, but perhaps we are too far apart.