The squadron launched an amphibious assault on the beach at Waikolu, meeting minimal resistance.  It was a bit tricky landing in the basketball sized river rock, but the swell was down and there were no casualties reported.  Aerial surveillance duties were handled by Jonathan, who got some fantastic drone video of the spectacular scenery and the fleet sitting serenely at anchor.

I walked about half a mile west along the rocky beach in one last desperate attempt to find a glass ball on this voyage.  It was reminiscent of my walk along the same beach 49 years ago after swimming down this coast with pals Dave Schaefer and Palani Ashford.  Somehow the boulder hopping seemed easier at age 17 than it did at 66.  We didn't find any glass balls on that first walk, and I didn't find any this time either. 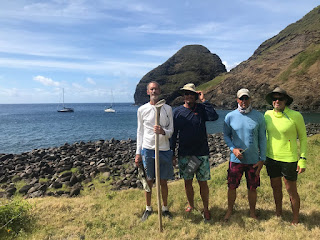 The squadron officers enjoyed a final dinner party aboard Maka'oi'oi and watched with awe as the sun disappeared over the Kalaupapa Peninsula a mile to the west and the majestic cliffs of Molokai's north shore glowed orange as daylight faded.  Discussion over dinner focused on the fleet's final chance to change its luck at fishing.  It was decided that a 6AM departure the next morning would optimize our chances at boating a fish while they were having breakfast, the most important meal of the day in the aquatic world, I am told.

Our alarms went off, coffee was brewed, sleep rubbed from our eyes, and the crews jumped into action for the last passage home.  Bo helped me manually pull Maka'oi'oi's anchor, sail was set, fishing lines deployed, and the fleet was off! 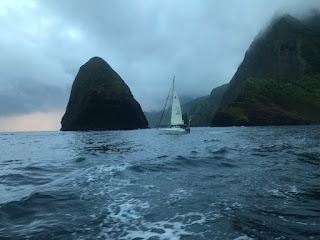 Both boats ran along the 50 fathom line off of Kalaupapa hoping to snag an ono, but they were all apparently dining elsewhere.  Once clear of the peninsula, jibs were wung out and we enjoyed a lovely sail directly towards Kaneohe.  We managed to sneak out a bit ahead of Puanani, so about half way across the Molokai Channel the Beneteau 39's crew hoisted their spinnaker to catch up.  Puanani reeled us in until they were right on our stern off of the Mokapu Peninsula where the spinnaker decided it would rather be wrapped around the headstay than fly properly.  Cleaning up the mess gave Puanani's crew something fun to do over those last few miles.

Both boats arrived back at the Kaneohe Yacht Club shortly after 2PM yesterday to a fantastic greeting by our lovely wives and friends.  Lei, pupu, cocktails and celebration to mark the end of a fantastic trip!