Moseying Up the Kona Coast

Underway, heading north.
Yesterday afternoon's experiment with the "Skorkle" was a success.  Marcy and Clay gave it a try and it functioned just fine.  It was a lot of work to pump air into the tank with the hand pump though.  The crews of both boats pumped like maniacs for about fifteen minutes and got about two minutes of skorkeling out of it.  Not very efficient.  The group decided that it would be a great tool in an emergency, but might not be too practical for recreational use.
The squadron's officers enjoyed cocktails and dinner aboard Puanani last evening.  The itinerary going forward was discussed, and we decided to try out a new anchorage in front of a house owned by one of Clay's pals next.  It is located just a couple of miles past Kealakekua Bay.  Kealakekua is beautiful and historic, but we have to sneak in and sneak out during non-business hours to avoid getting cited by DLNR for being there.  I've always gotten away with it, but it's better to avoid the risk if we can find a place nearly as good nearby.
I think Clay has decided that the motley group of officers that command the squadron need a bit of culturing.  He has proposed "poetry night" a couple of times and received something less than an enthusiastic response from us heathens.  To prod us along, he has read a Robert Service poem at two of our squadron dinners.  It was "The Killing of Sam McGrew" a few nights ago on Niihau, and last night "The Cremation of Sam McGee".  The group had decided on a compromise, and going forward each squadron officer will recite a haiku they have written especially for the occasion at dinner every evening.
We had time for a snorkel this morning before getting underway.  The water was warm, super clear, and full of fish and coral.
As I write this, we are moseying along up the Kona coast under power with two fishing lines out.  Puanani is guarding our port quarter from any pirate activity that might come from that direction.  It is a beautiful sunny Kona day with a barely perceptible sea breeze blowing.  Life is goo. 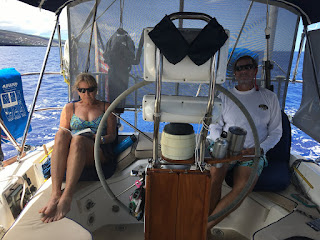 --
Sent from Gmail Mobile
Posted by Noodle's Notes at 3:35 PM