The Smoothest Crossing Ever

The trade winds slowly filled in the Alenuihaha Channel, but they never got above nine knots, and the seas were almost Kaneohe Bay smooth.  Maka'oi'oi charged across the channel on a close reach in unbelievably stunning conditions.  This channel is one of the roughest in the world, but we caught it on one of its best days ever.
The boobies seem to like Maka'oi'oi.  Just before sunset we had two of them land on the bow pulpit for the night.  They were gone at dawn this morning, and fortunately they didn't make any deposits while in residence. 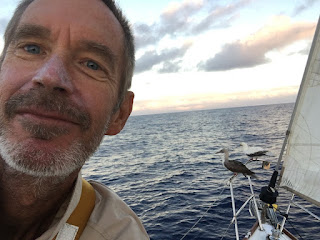 At 8PM we sailed out of the Alenuihaha and into the lee of the Big Island.  It is usually a big void of air behind 14,000 foot Mauna Kea and Mauna Loa, but sometimes there is wind there, and this was one of those times.  After  a couple of hours of powering the wind filled in from the southwest at 14 knots, and we screamed toward Okoe for six hours.  The wind died again, then filled from the north.  That breeze didn't die off until we were just 5 miles from the coast.
I came on watch at 6AM this morning to find Mauna Loa looming large ahead of us.  I spoke to Lori as soon as we got in cellphone range.  It was great to talk to her.  She has been following Puanani's progress on their tracking page, and she told me that they are 30 miles directly behind us.
At 815 this morning Bo came up on deck and noticed something floating behind Maka'oi'oi.  I spun the boat around thinking it might be a glass ball.  It turned out to be a hawksbill turtle lounging on the surface.   He had a grotesque hump on his back.  I've seen that before at the turtle rescue center in Marathon, Florida.  Some turtles get a bubble of gas trapped in their shells which causes the hump, makes them more buoyant than normal, and prevents them from diving.  Poor guy, he seemed fine but didn't dive when we approached. 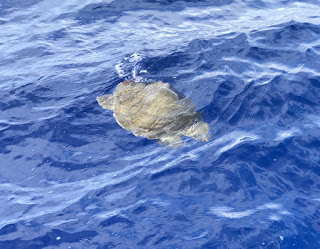 Shortly thereafter we discovered a personal fish aggregation device (FAD) buoy about seven miles off of the coast.  We could see fish below it as we passed but we didn't hook up.  We also passed the official FAD buoy three miles outside of Milolii.  Once again, no hook up.  It looks like we will need to count on Puanani if we want fresh fish for dinner.
We anchored in Honomalino Bay at 1030AM.  This is a lovely anchorage about a mile south of Milolii.  We chose to anchor here because we will be picking Bo's wife Marcy up at Milolii Landing this afternoon.  After we gather Marcy we will head the three miles south to meet up with Puanani in Okoe Bay.
It took just over two days to complete the 300 mile passage from Niihau to the Big Island.  I've made that trip more than ten times now, and this was the most pleasant weather, and smooth sailing, I've ever seen.
--
Sent from Gmail Mobile
Posted by Noodle's Notes at 2:52 PM