At anchor in Honolua Bay, Maui
The trade winds blew with a vengeance in La Perouse Bay, even harder than it was blowing in Nishimura Bay.  Aboard Maka'oi'oi we decided that the mainsail cover would likely blow right off the boom, so we didn't put it on.  The strong winds tested the squadron's anchor gear, but this morning both boats hadn't moved.  It was so windy that we didn't get together for dinner.  Launching and retrieving dinghies and traveling by dinghy in that much wind just didn't seem prudent.
This morning we got an early start in order to get through Maalaea Bay before the trade winds filled in.  When the trades are up, as they are now, the wind gets squeezed between Haleakala and the west Maui mountains, accelerating as it enters Maalaea Bay.  This phenomena doesn't normally start until about 11AM though, so the early bird avoids the storm.
We made it 2/3 of the way across the bay when it went from flat calm to 35 knots in an instant.  Good thing we left the 2 reefs in the mainsail from the day before.  Puanani had learned their lesson, and left all three reefs in their mainsail as well.  We only had to deal with the wind for a short time until we were in the lee of the west Maui mountains.  The engines came back on, and we powered to the wind line off of Kaanapali.  Once again, we were grateful for our deeply reefed sails as we short tacked up the coast to Honolua Bay.  Anchors went down at 130PM in one of the calmest and most tranquil bays in Hawaii. 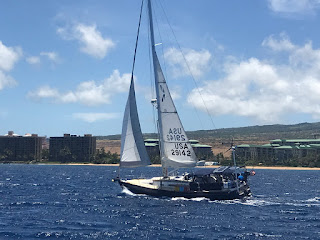 Honolua is normally visited by multiple tourist catamarans every day, three at a time, for a few hours each.  Covid 19 has put and end to that, at least temporarily, and Honolua Bay has resident visitors only.  There were three other local boats in the bay when we arrived, but I think 2 are day trippers from Lahaina harbor.  It will be nice to relax in a peaceful anchorage tonight before we venture down the north shore of Molokai tomorrow. 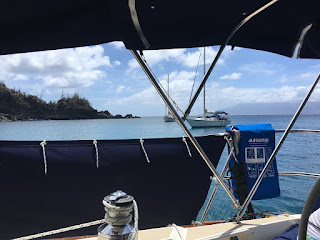 --
Sent from Gmail Mobile
Posted by Noodle's Notes at 6:17 PM