At anchor in La Perouse Bay, Maui
We are going through a period of strong trade winds, so strong that small craft advisories are in effect for the Alenuihaha Channel.  That meant that it was blowing in Nishimura Bay as well, just like it has for all of my visits there.  So it blew like stink all afternoon and into the night.  At least the seas were calm so it was still a relatively good anchorage.
We make the trip up to Nishimura, the furthest north viable anchorage I know of on the Kohala coast, because that puts the wind on our quarter for the Alenuihaha Channel crossing to Maui.  With the wind that far aft, it doesn't matter how hard it blows in the channel.  I usually reef the mainsail as deeply as I can, roll out a small rag of a jib, and hold on for the 37 mile sprint across to La Perouse Bay, Maui's closest comfortable anchorage.
The offshore wind at Nishimura can be challenging though, and Clay was concerned when he made the half mile dinghy trip to pick up Johnathan in Mahukona.  He came over to borrow our dinghy oars and took along a VHF radio and cell phone... just in case...  There was no problem though and he and Johanthan came back safe and sound at 4PM.
Marcy injured her hamstring jumping from the pier to the boat in Honokahau, and she has been hobbling around ever since, unable to use her injured leg.  She went to Maka'oi'oi's swim step for a bath yesterday afternoon while Bo was kicking my butt in cribbage.  We were focused on our game, lost track of Marcy, and then noticed that there wasn't any sound coming from the stern of Maka'oi'oi where we thought she was.
We searched frantically for her, thinking that perhaps her injured hamstring had caused a cramp.  Bo and I were yelling to Puanani, anchored nearby, that we couldn't find Marcy.  After a panic stricken few minutes Bo sighted her 150 yards away swimming along as happy as a dolphin.
Marcy is an Ironman triathlete, and probably more seaworthy than Maka'oi'oi, but that didn't stop us from worrying about her, particularly with her injury.....  Scary....
Last night the Puanani crew came over for grilled ribeye steaks by Chef Bo, potatoes, grilled veggies and salad.  This morning the squadron bid adieu to Marcy, who flew back to Oahu. 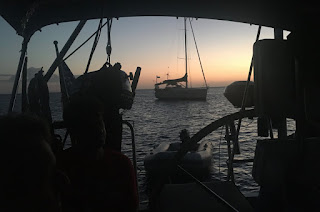 At 8AM the anchors came up and the fleet set out for its assault on the Alenuihaha Channel.  The wind kept increasing as we poked out into the maelstrom, 20,  30,  35 knots.  No problem though; the wind angle and sail combination made things comfortable..... on Maka'oi'oi.
Puanani had decided that two reefs in the mainsail was enough, and that proved to be inadequate.  We noticed that they kept rounding up, even with a handkerchief of a jib set.
About halfway across the channel we saw the Puanani crew roll up the jib, then drop the mainsail.  We tried calling them on the VHF radio and cell phone to see what the problem was.  Had they lost a man overboard?  We couldn't get a reply, so rolled up our jib, turned on the engine, and turned around into the storm.  Puanani was a half mile to windward of us by this time, and we made little progress back towards them in the blasting winds and huge seas.  Ten minutes later we saw them rehoist their mainsail, turn downwind, unfurl their jib, and resume their heading towards La Perouse Bay.  We got back on course to Maui as well and a few minutes later Clay called on the cell phone.  They had dropped their sails to put a third reef in the mainsail.  It turns out that Maka'oi'oi' had a problem receiving on both the built-in and hand held VHF radios.  Puanani could hear us calling clearly and responded each time, but we couldn't hear them.  Something else for the fixit list.  It was scary for a few minutes, but all's well that ends well.  The squadron has learned from this little incident, and in the future if one vessel is going to do something that might concern the other, we will communicate our plans in advance.
Otherwise, the crossing was uneventful for both boats.  We had two fish strikes aboard Maka'oi'oi.  The fish never even slowed down and took two of our lures as a donation to King Neptune for the fine weather.  Puanani saw as much as 40 knots of wind on their anemometer. 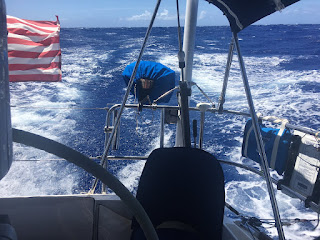 As I write this the squadron sits snugly at anchor tucked up under the cliffs on the eastern side of La Perouse Bay.  The wind continues to howl overhead and there are nothing but whitecaps offshore.
--
Sent from Gmail Mobile
Posted by Noodle's Notes at 6:44 PM