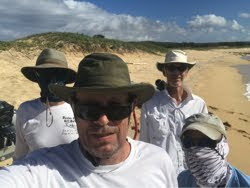 At anchor in Keawanui Bay, Niihau.

At 4PM yesterday it had cooled off to the point that we could venture ashore without being scorched by the sun. Looking like the invasion of Normandy on D-day, the crews of the squadron made a simultaneous dinghy landing on the sand beach directly inshore of the armada.

We started wandering north along the rocky shore, and just fifty yards from the dinghies Bo nearly stepped on a napping monk seal. Bo was far more startled than the seal was, and we quickly retreated to give the animal some space. Monk seals are amazingly camouflaged when lying on the basaltic rocks along the shore, and it is easy to walk right by them without noticing their presence. We counted a total of nine seals yesterday, and there were probably a few more that we missed.

The other form of wildlife abundant on this end of the island is pigs. We counted eight up on the open plain above the beach. They must be hunted, because the herd took off when they saw us.

No glass balls, but we collected some beautiful shells and had a pleasant hour long hike along the shore. Clay found what we think might be the bone structure from a monk seal flipper.

The fleet's officers were enjoying pre-dinner pupu and cocktails aboard Maka'oi'oi when we noticed a Jeep ashore. We've been spotted, and our forays ashore may be over. No matter, this has been a spectacular anchorage, and the boys have loved it.

Bo served up a magnificent competition quality chili last night, raising the bar once again. What will happen next?

Niihau lies in the lee of Kauai when the trade winds are blowing, and the local wind can come from every direction. That's exactly what happened last night, and the fleet was glad that our anchors were well set in an area with 360 degree swinging room. The shifting winds got up to nearly fifteen knots after dark, more than I would have expected.

After sunrise today Clay noticed a huge ulua under Puanani, and we were treated to a monk seal diving and feeding at a coral head behind the boats for most of the morning.

At 11AM the squadron got underway to do some exploring. The crew of Puanani spent about half an hour screwing around getting their anchor unwrapped from the rock outcroppings. I think perhaps Puanani liked the Pu'ukole Point anchorage and didn't want to leave.

At 1230 the fleet anchored off of Keawanui Bay where, 36 years ago, I collected sixty glass balls on the beach. Shortly after the squadron was secured a school of spinner dolphin came by to pay their respects, followed by a large Jeep ashore. It is nice to know the local residents are concerned for our safety.

We'll depart in the morning for the Big Island, and the next couple of days could be tough as we work our way through the channels between and the lees below the other islands. The weather is looking good with moderate trade winds forecast, but we will be busy with only two of us aboard each boat. I hope to be blogging daily, but I won't if I am too busy or too tired.